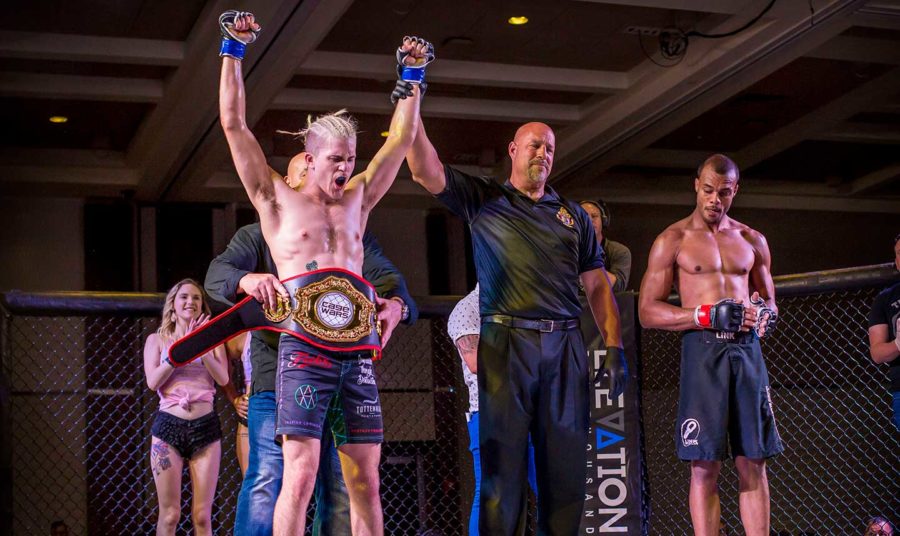 Some of the greatest fights in MMA history have been built around a rivalry. Liddell vs Ortiz, Khabib vs Connor and Gsp Koscheck come to mind. The fight that took the cake for Cage Wars 42 happened to be built around 2 men who believed more than anything, that they were better than the other. Chris Almestica vs Connor Rideout, the lightweight title unification bout, was fireworks from the opening bell. Chris started the first round strong with strikes and a few takedown attempts before getting Rideout to the mat and holding him there for the remainder of the round. Toward the end of the first, Almestica had a close RNC but the clock worked against him and the rounded ended before he could sink it in. In between the first and second round, Rideout and his corner were able to rework their game plan to not just out work the Massachusetts Finishing Machine for the remaining 6 minutes, but to take the title back to Canada. This fight proved too many that the Rideout Revolution is now.

Xi Lau vs Grant Kabol answered the question on everyone’s mind, who is the best flyweight in the east? Grant Kabol showed high level striking and grappling for 9 minutes, exhausting Lau. After the final bell it was Kabol swing Lau home with his title aspirations in the rear view mirror.

Cage Wars double champ Jeremy Woolfolk vs Tom Foote was expected to be a wrestlers dream match. Instead we saw a great first round of stand up action. While Foote was working his leg kicks and trying to set up combos, he didn’t realize he left himself open for a giant looping hook from Woolfolk, which sent him to the mat, ending his night and earning Jeremy Woolfolk knockout of the night.

Wrestling dominance: 2 words that rang in the head of David Rice as his feet touched the mat. Jose Carrasquero, who is perhaps one of cage wars biggest stars, taped up his hands with dreams of becoming the welterweight champ. Unfortunately, Rice’s wrestling was too much for the Xtreme Couture standout, putting his championship dreams on the back burner.

Andrew “Gunshot” Geisler vs Anthony Roberts was a fight the certainly delivered on the hype. Roberts, who took the fight on short notice, came out looking crisp but it was Geisler’s pressure and ability to land first that sent the Rochester native off track. It was in the second round when Gunshot called his shot and ended the fight with yet another impressive finish. With this win, Andrew Geisler captured the Cage Wars featherweight title, and solidified himself as one of the best featherweights in the Northeast.

The first title fight of the evening was between Chris Miles and late replacement, Jordan Beverly. These two men showed that the super heavyweights belong on the grandest stage of MMA. When the ref started the action, they met in the center and bombs started going off. When the smoke settled (and after one hell of a hook) we had a new USMTA super heavyweight champion in the form of Showtime, Chris Miles.

Our fight of the night came in the welterweight division as undefeated team link prospect took on Canadian fan favorite, Omar Waddell. This fight was a back and forth on the feet with both men landing some nice combinations but it was Sage Philippe’s excellence on the ground that led to him edging out Waddell on the judges score cards.

Anthony Panek vs Mike Erb was a proper super heavyweight barn burner. During the fight Anthony Panek showed the quickness of a flyweight, and the power of a gorilla, as he lit up Erb on the feet with impressive strikes that included a Superman punch. The pressure and power from Panek was too much for Erb and he went to the mat in time for Panek to secure a RNC victory.

Jimmy Bruce vs Dom McNamara was one of those fights that saw a little of everything, but it also saw a less than satisfying result. After seemingly winning the first round and being in his way to securing the third round, MVMMA’S McNamara threw a kick that a downed Bruce, hitting him in the head and rendering him unable to continue. Bruce got the win via disqualification.

Jon Bianco vs Ryan Hickey was a fight that would have been perfect under K-1 rules. From start to finish it was what I like to call “what did you say about my mother” strikes being thrown by both parties. In the end it was Hickey’s ability to string together his combos and make them land that led to the judges giving him the W.

The third fight of the night was a basically a grappling match with some strikes. Carrol tried to dominate in the clinch but Brant was able to pull guard and lock in close guillotines on 2 separate occasions. Ultimately, Brant’s work from his back and near submission were enough to get the nod from the judges.

When you go into a fight, whether you admit it or not, you dream of the perfect finish, that was the case for Cole Alaxanian. About 45 seconds into the fight Alaxanian hit Payne with a two piece combo that sent Payne crashing to the mat. After a few more shots for good measure the referee had seen enough and stepped in, declaring Alaxanian the winner.

The weigh-ins usually set the tone for a fight. Here, that was not the case. The bell rang and for 51 seconds this fight was 100 miles per hour. The fight ended with Locklear dropping Mo Omar down for the third time. Harley Locklear showed the world why he is here to stay.