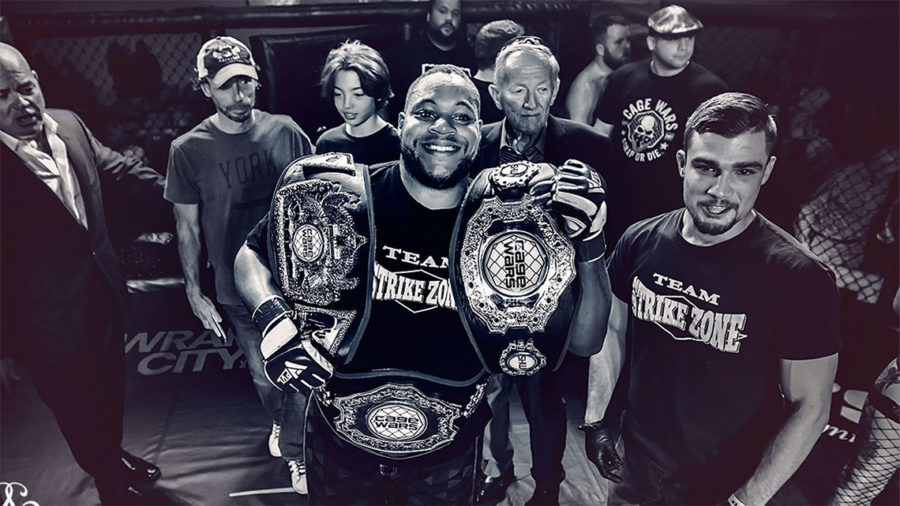 by Ben Field, Against the Cage  – Cage Wars

On Friday September 13th, Cage Wars brought another action packed night of amateur mixed martial arts to the Rivers Casino & Resort Event Center in Schenectady, New York. The sold out event, had fans on the edge of their seat, with eleven MMA fights and one women’s kickboxing bout.

In this fight, featherweight Champion Andrew Geisler showed why he is the king of his division. It was a combination of Geisler’s ability to push the pace, land first, and use his range, that kept Kahler from turning it into the dog fight that he likes. Geisler may not have showcased all his skills in this fight, but he was able to get the nod from the judges and keep the title around his waist.

This fight saw a very interesting first round that was back and forth. We saw the power of Hamdy Abdelwahab on display during every second of this fight. Unfortunately in the second round, Abdelwahab threw a total of eleven consecutive strikes to the back of Norman’s head, ending the fight, and giving him his first loss.

Cole Alaxanian came into this fight as ready as he has ever been. In the opening round his hands were crisp, he was calm and composed and was able to hurt Stefano Hosko on multiple occasions. It was in the second round that Hosko was able to initiate the clinch, slam Alaxanian to the mat and secure a D’arce choke to not only win submission of the night, but also the Cage Wars lightweight championship belt.

Cage Wars 43 fight of the night came in the form of this absolutely insane title bout that saw hard hitting action from opening to final bell. Sage Philippe’s cage control, grappling and ability to control the pace of the fight, was enough to get the unanimous decision from the judges and the attention of those in attendance. This is Sage’s second fight of the night in a row.

Amear Bani showed the world he was more than just an armbar guy for the first round of the fight. He was able to bring the fight to Bellemare in the first by mixing up his strikes, countering and staying patient. It was in the second round where he proved he is the armbar guy by sinking in an armbar, leaving Robbie no choice but to tap.

In what was one of the most highly anticipated fights of the evening, we saw Doran walk Sinha down and throw everything but the kitchen sink at her. Sinha was able to land a few good strikes at the right times but unfortunately for Sinha, it was only enough to win on one of the judges scorecards.

They say that nothing is more dangerous than a caged animal. Mike Alessi proved that to be true in 65 seconds as he was able to secure a quick takedown and pound Hayes until the ref decided he had seen enough.

Devin Olen vs Steve Miller was a back and forth war that ended with a bang. An amazing first round, with some back and fourth grappling, never could have prepared us for the thunderous right hand that Devin Olen landed in the second round. That hook not only ended the fight, but ended the night for Steve Miller.

Perhaps one of the most technical fights between two “green” fighters. In the end it was Aris Smith’s ability to chain together submission attempts, put together his combos and his opponent in trouble, that led him to getting the nod from the judges.

Campos vs Potter was a back and forth fight that saw Campos chain together submission attempts and use high level grappling dominance, to secure a unanimous decision victory.

This fight set the pace for the rest of the night. Sasso was able to own the first two minutes of the fight, with strong grappling and a successful takedown. Angelo’s ability to get his feet on Sasso’s hips, was hindered by shin pads. He tried to get up but was held in position until referee Dan Miragliotta stood them back up. Upon the reset, Angelo was able to land the “Knockout of the Night”-winning left hand, and put Sasso down and out.