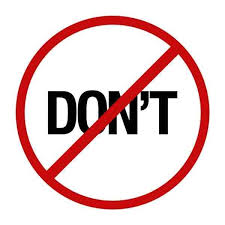 What Not To Say To An MMA Promotion

Today I would like to bring you “What Not To Say To An MMA Promotion”. This is not to reference any particular fighter past present and hopefully not future. As we know if you’re “PC” you probably shouldn’t be read a thing I author. If I offend you or think this is about you please move along. This is made to make light of some of the things I have heard from various promotions.

So let’s get this started shall we!

-I can take a punch to the face.
We say good luck with that one. Obviously you never heard Iron Mike Tyson’s phrase and if I have to tell you more just Google it.
-I’ve never been knocked out.
I bet you haven’t, but have you stood across the cage from a fighter that’s thinking one thing and that is to knock you the fuck out!
-These fighters don’t look tough I could take anyone you put me against.
Really! Let me put your untrained 285lb self in the cage with a 105lb woman fighter! I bet you change your mind real quick!
-That fighter is from a “Green” gym.
That could be, but you are going to put your ass on the line and test them! Once again good luck with that!
-I will sell more tickets than you can print!
I’ve heard that a thousand times and come fight night those fighters didn’t even sell 3 tickets.
-I only will take a Pro fight, I’m 0-3 and I’m ready.
OK let’s get this straight your going to step into the cage with a real fighter that has had 20 amateur fights. No matter the record of the fighter with 20 fights he has cage experience. So hold on if a promotion even gives you a fight. Get all the experience you can as an amateur.
-My stand up game is crazy! I will end it in seconds of the first round.
I bet it is and that fighter across the cage has watched your previous fights and shoots for the take-down immediately. The fight did end quick with your ass being submitted and you never even landed a punch.
-I played UFC and UFC 2 on the Xbox 360 and Xbox One and I am undefeated.
Holy shit!! I’m not even going there!

Now for the grand finally when a promotions asks who you train with and your answer is:
-UFC!
It’s true and I’ve heard it doing interviews!

Now I make light of the sport at times and to the men and women that step into the cage we thank you! But on the same token folks don’t embarrass yourself. We know enough people in the game to steer you in the right direction and put you in contact with a good promotion.

Next time I will be writing about what we have heard during fight night from the fans.