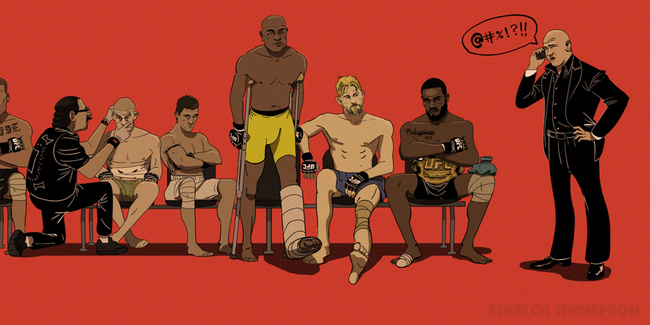 What Promotion Should I Fight For? Part 2

This is Part 2 of an ongoing series in “What Promotion Should I Fight For?” If you haven’t read Part 1 as of yet follow the link to catch up to date.

*Once again a reminder this is my opinion and NOT Cage Wars.* At anytime they can remove the posts we make on their site.

So let’s get going shall we?

We have been digging into some promotions in our area and beyond. What has been revealed is not all negative, but some are just plain out ridiculous!

The fights that are taking place in Whitehall NY at the Whitehall Athletic Club are just outlandish! The promoter fights on his own card, takes peoples belts and keeps them as he won them if they don’t show up for fights. As of right now all I can say is shame on you Ground and Pound Promotions. Also shame on the AKBF (their sanctioning body) for allowing this!

While we are talking of the ABKF, they are as well running shows that the promoter is the sanctioning body! We are unsure of the promotions name because they really don’t go by one, but they do happen to have the old Five Guys Fighting cage and still us their mat. This way it’s easy to know what promotion this is. This is also allowing medically suspended fighters fight.

These informational pieces are not in anyway a slap to the fighters fighting on these cards. It is so the fighters can be informed and stay away from these promotions all together. We know fighters fight, but sometimes taking a fight you are not comfortable with is NOT good.

Now onto our last promotion/sanctioning body dilemma thus far. UMMAF (sanctioning body) is sanctioning their Northeast Directors promotion ACC (Aggressive Combat Championship). As we have seen they seem to be running a safe fighter environment, but we still feel it is a conflict of interest. How can the director oversee sanctioning over his own promotion? Can they remain biased if a safety violation occurs or even if the fighter does not have all the required paperwork, just to name a few issues that could arise.

To me it seems like days of old and sanctioning has not helped one bit unless it is done right. NYS needs to look into these promotions and sanctioning bodies and see what is really happening behind the scenes. It feels like if you have the money and can fill out the forms you to can be a sanctioning body as well as a promoter.

This fighters is why you must know the promotion you are fighting for. If it doesn’t seem right don’t fight. If you are 0-0 and being matched with a 2-30 run! Just because that fighter has more losses than wins that only means he has experience in the cage. It’s a total different feeling when that cage door closes behind you.

Remember your safety is paramount and turning down a fight does not mean you are a punk. All that means is you respect the sport as well your and your opponents safety. Fighter fight but do it safely.

Warriors Instinct MMA is not here to just rip apart promotions or sanctioning bodies. We are here for your the fighter as you deserve a larger voice in the MMA community!

Thank you for reading and stay tuned for Part 3 of our on going series.